Exploring the original Bible stories of the nativity, as found in the Christian Gospels.

Exploring the original Bible stories of the nativity, as found in the Christian Gospels.

Every pupil will need a copy of the Bible detective worksheet.

Pupil-friendly versions of the text can be found in the Good News Translation or the Contemporary English Version, among others. If you are using a set of Bibles, you may need to explain how the chapter-and-verse system works. Alternatively, print out the relevant sections that may be downloaded from a variety of websites, including www.biblegateway.com.

You may also wish to find and display a few popular images of the nativity story, for comparison with the original texts, but please ensure you have the necessary permission before using any images obtained from the Internet. 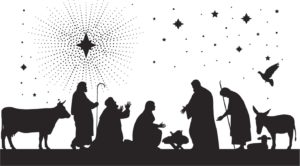 Introduction: who did you play?

Which of you took part in a nativity play when you were smaller? Stand up if you were ever: a shepherd; a king; a wise man; a sheep; an angel; an innkeeper; a donkey; a wandering star. Is there anyone or anything else we’ve left out? (Mary, Joseph and baby Jesus?) Can you remember what happens in the nativity story?

Use pupil discussion to draw up a class collective ‘memory’ of the story on the board, listing all the traditional elements, including a stable.

Pupils should discuss with a partner – which of these listed story elements were in the original Bible story? Which bits of the story do we think are ‘true’, and why?

Explain that we are now going to stage an investigation. We are going to find out what the original narratives actually say about the birth of Jesus, and you may be surprised. The Bible story is the one that all the nativity plays and Christmas cards are based on, and it’s about 2,000 years old. There are two accounts of the birth of Jesus, written by his friends Matthew and Luke. Just like a real detective or archaeologist, you are going to examine the evidence and then give your opinions about the original Christmas story!

Distribute copies of the Bible detective worksheet. From the list of story elements already on display, which of these do your pupils think are the key elements (most important bits) of the story? Together create a class list of agreed key elements, with each pupil then noting them in the first column on their worksheet. (Also do this on a display board to show how it works.)

The class will now need modern translations of the original birth narratives found in the New Testament of the Christian Bible at:

Read aloud the whole Matthew narrative, with the class following in their own copies. (Expect giggles at the mention of the word ‘virgin’, and some shock at the account of the massacre of the children.) Afterwards, ask which of the supposed elements happened in this version. Were there any they didn’t expect? List them together on the board.

Pupils should then complete the same exercise using Luke’s narrative, working either independently or in pairs, to then move on to the more able questions (see below). Afterwards share discoveries in a mini plenary. Some possible pupil discoveries:

To tackle the Luke passage, SEN pupils will need either an adult reader or to be paired up with a more able child.

More able pupils should be challenged by being offered one or more of the following questions:

School nativity plays can be great fun, but the significance of the Messiah’s birth can be lost in the general storytelling. This lesson gives pupils the opportunity to discover more about the original accounts.

The star in the original narrative is seen to ‘go ahead’, but all stars appear to ‘move’ through the night, since we live on a revolving planet. For the Magi, however, this star had particular significance, so its varying position in the night sky might have been relevant to their journey. They were probably astrologers from Babylon in the Persian empire, close to Baghdad, the capital of modern-day Iraq. The intrusion of these foreigners into the nativity caused a great deal of upset and disaster for the people of Bethlehem.

The shepherds on the hills were poor herdsmen, probably the least important members of their society. Their working lifestyle prevented them from undertaking the traditional Jewish religious practices of daily ritual washing, making them ritually ‘unclean’. However, they were the first in the vicinity to be told about the Messiah’s birth.

The angels appear as supernatural messengers of God. Notice how often their message includes ‘Do not be afraid’.

Photo by Walter Chávez on Unsplash