Using the symbolism of a flower to recount and revise key features of the Easter story.

Age and subjects suitable for

Your class will need to be familiar with the essential plot points of the Easter story. If they are not, then prior to this lesson run an extra lesson recounting both the key points of the story and what they mean for Christians. You could use one or more of the following Barnabas in Schools resources:

For this lesson, you will need to display two lists of information: the key points of the Easter story and the key features of a passion flower. If preparing this for display beforehand, keep both lists separately covered until the right time for them to be revealed during the session.

The Easter story
Palm Sunday: Jesus rides into Jerusalem, enters the temple, throws out the moneychangers and teaches the people.
Maundy Thursday: Jesus celebrates Passover with his friends at the last supper. He is arrested in the garden of Gethsemane, and put on trial.
Good Friday: Jesus is whipped and taunted, being forced to wear a purple robe and a crown of thorns. Then, he is crucified outside the city and, after he dies, is buried in a tomb.
Easter Sunday: Jesus’ friends say they’ve seen him alive again. He tells them to share the good news with everyone else.

Passion flowers
Leaves: for photosynthesis – using the sun’s energy to make food for the plant.
Tendrils: this climbing plant uses them to hold on to other plants, trees, walls or fences.
Ten petals and sepals (five of each): for attracting insects; sepals protect the growing petals.
Radial filaments, usually over 100: sometimes called a corona.
Central stalk: carrying five stamen (producing the pollen) and an ovary containing three styles, each ending in a stigma, which is sticky to collect the pollen during fertilisation by insects.
Colours: what can we see?

Some pupils will need individual copies of the passion flower worksheet to log their responses.

If you are planning to run the extension Art and Design lesson, the planner worksheet will help pupils draft some ideas. You will need to have ready a good supply of thick drinking straws, different coloured tissue paper, glue, sticky tape, coloured card and scissors. Creating your own example of an artificial flower will give them a clear idea of what to aim for, and help you anticipate any problems with design or construction in class.

Passion flowers blossom during the British summer, which makes it difficult to show an example of the flower in spring. Instead source a few images, ensuring you have the necessary permission to use them in a classroom setting, or use the one included here.

Introduction: what do you remember?

We’re going to be thinking about the Easter story in a new way. But first, let’s quickly recap the key points of the story. What happened on: Palm Sunday, Maundy Thursday, Good Friday, Easter Sunday?

Quick discussion in pairs, listing or revealing main points on the display board, as listed in the table above. Set pupils the task of quickly listing the key bullet points of this whole story in about ten words. The worksheet, ‘The secret code of passion flowers‘, could be used for recording ideas.

Development: what do you see?

How good are you at noticing something, then describing it to someone else? I’m going to show half of you (one of each pair) an image, while the others are looking away. I’ll give you 30 seconds to notice as much as you can, then I’m going to hide the image and you’ll have to describe it in as much detail as possible to your partner, who can ask questions. (Extension for older pupils – tell your partner how to draw it. This is not easy!)

After the exercise, show the image again to everybody. What did we notice first about this strange plant? Together, list its main features. (See the table above. This is a useful opportunity to revise the parts of a flower.)

Show images of other passion flowers. Do we notice any similarities in shapes or numbers of features?

Passion flowers (Passiflora in Latin) are now grown across the world, but originated in Central and South America (Mexico and northern Brazil). In the 16th century, Christian missionaries in South America were teaching the local people about Christianity. One Mexican monk named Brother Emmanuel de Villegas had a big idea. He knew that most of the local people couldn’t read and write, but they certainly knew their plants, and he realised that these flowers could be used to recount the Easter story in a new way.

Can you work out what he did? Can we use our imaginations and see on the flower the shapes of any significant objects, numbers or shapes in the Easter story?

Discuss in pairs. See if anyone has any ideas, then share the following possibilities for symbols.

However, there isn’t one perfect list. Since that time, different Christians around the world have used the flowers to tell the story in different ways. Could you do better?

Share some pupil ideas and the fact that passion flowers have different names in different countries. For example, Espina de Cristo (‘Christ’s thorn’) in Spain, and Christus-Krone (‘Christ’s crown’), Christus-Strauss (‘Christ’s bouquet’) and Dorn-Krone (‘Crown of thorns’) in Germany.

Art and Design – creating new artificial flowers with hidden symbolic meanings. Study and sketch some real flowers, noting and labelling the common anatomical details. Compare these with the flower paintings of the artist Georgia O’Keeffe.

What do you think might be the most important bits of the Easter story for a Christian? The passion flower is often used to remember Jesus’ arrest, sufferings and eventual death on the cross, but Christians also celebrate the story of his coming back to life. Your challenge is to design and make your own anatomically correct flowers, which for RE purposes should also contain a hidden Easter symbol, that could be significant for a Christian believer. Could there be something from the events of Palm Sunday,  the Last Supper, or the Resurrection?

How many leaves, sepals, petals, stamen/anthers or other features could your flower have? What might the numbers mean? What will the shapes and colours of your petals (etc.) be, and what will they symbolise?

The worksheet ‘Design an Easter flower full of symbols‘ could be used to support this. Pupils should make a rough design, possibly sketching it out first with an explanation of the intended symbolism. Then they should create the separate parts. Coloured tissue paper is good for petals, whilst thin coloured card or paper can be used for smaller features and the larger sepals and leaves. Do you have any other materials that would be useful for this task?

Use a large drinking straw for the stem. If time is short, use sticky tape to fix first the petals, then the sepals and finally the leaves. Afterwards, squeeze some PVA glue into the end of the straw, and insert the previously made stamen, anthers and larger stigma into the same end. What special name will you give your plant?

If you have more time, construct the whole thing in reverse, starting with the stamen/stigma and then working back. When children are sticking lots of separate parts together with PVA glue, it is often best to do one section and let it dry before going on to the next bit of construction (One short session for sticking the stigma/stamen, one for the petals and another for the sepals/leaves). Use the in-between times for creating and writing imaginative labels explaining the design and naming of the flowers.

Avoid waste of art materials by demanding that pupils first use the planning sheet to plan out the quantities needed, before starting construction. 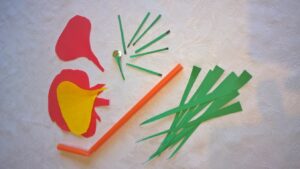 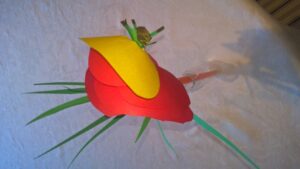 In the example shown here, there are six stamen, representing the six days of Passion Week, and one central stigma, representing Easter Sunday and the resurrection in the (golden) middle.

Similarly, there are six red petals, and one yellow. The long thin leaves are reminders of the palm leaves waved by the crowds on Palm Sunday, at the beginning of the week.

The word ‘passion’ has several meanings, but for Roman Catholic Christians it particularly describes the themes and events of the Easter story (eg. medieval Passion plays). In1610, Emmanuel de Villegas, a Mexican monk, was the first person to either notice or record the symbolism of the passion flower for Christians, and made sketches that were sent back to Europe. Although his drawings were initially disbelieved as fanciful nonsense, botanists and gardeners have since produced over 600 varieties of the native plant, which also grow well in the British climate – but don’t flower at Easter!