The world of Narnia offers a place of intrigue and imagination. There are many ways in which The Chronicles of Narnia stories offer the opportunity to explore aspects of the Christian faith.

The world of Narnia offers a place of intrigue and imagination. There are many ways in which the stories of The Chronicles of Narnia by C.S. Lewis offer the opportunity to explore aspects of the Christian faith. This idea invites pupils to reflect upon the possible areas of overlap.

Practise the script given below before your lesson, remembering that the whole scene will be upside-down to you! Speak slowly, letting the series of symbols and words lead your storytelling – there’s no rush. Allow at least 10 minutes for this, including time for pupil questions at the end, perhaps working with a talking partner before sharing their questions with the rest of the class.

Position the three circles on the backcloth, overlapping. Then place the symbols, pictures or labels into the circles as you describe them using the following script as a guide. Place a copy of ‘The Lion, the Witch and the Wardrobe’ near the Narnia circle, and a Bible near the ‘Christian world’ circle. The end result is shown in the diagram. 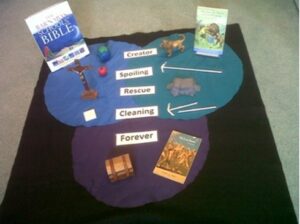 As C.S. Lewis wrote his stories about talking animals in the magical land of Narnia, Bible stories gave him new ideas about what could happen there. It was a different place, but it was still part of a Christian way of looking at the universe. I wonder if you can see how the world of Narnia connects with how Christians see the world.

In the world of Narnia, a good lion named Aslan created Narnia to be an amazing beautiful place. (Place the lion in the Narnia circle at the top.)

In our world, Christians believe that God created the world to be an amazing beautiful place too. (Place a model globe in the ‘Christian’ circle at the top. Connect the lion and globe across the two circles with the word ‘Creator’.)

In Narnia, there was also a bad person called the White Witch. She tricked people and made them do bad things, which spoiled Narnia, because she wanted to be in charge. (Place a wand in the Narnia circle.)

In our world, Christians believe that when the world was first made it was perfect, but then things went wrong – in the story of Adam and Eve in the Bible, Eve ate some forbidden fruit, and things were spoiled. (Place an apple in the Christian circle. Connect the wand and apple with the word ‘Spoiled’.)

Lots of things happened in Narnia that weren’t good – a boy called Edmund was nearly killed for turning against his friends, but Aslan took his place and was put on a Stone Table and killed to save him. (Add a model stone table to Narnia.)

Christians believe that Jesus died on a cross to save people and to rescue the world from the horrible things that spoil their lives. (Add a cross or crucifix to the Christian world. Connect the stone table and cross with the word ‘Rescue’.)

In Narnia, because Aslan died, the White Witch’s spell was broken, and he came back to life. (Add a broken wand to Narnia.)

Christians believe that because Jesus died and came back to life, things were put right and could become clean again. (Add soap to the Christian world. Connect the broken wand and soap with the word ‘Cleaning’.)

There are other Narnia stories, all full of exciting adventures. (Place ‘The Last Battle’ in the bottom circle.)

Finally, Narnia itself comes to an end, but then Aslan creates a new Narnia, even better than the first one – and this one will last forever.

And in this world? Christians believe that one day they will live forever with God. (Place a model treasure chest/box with the hint of something amazing peeking out – shiny fabric – in the bottom circle. Next to it place the label ‘Forever’.)

What’s the most interesting question you can ask about these two stories?

Photo by Annie Spratt on Unsplash